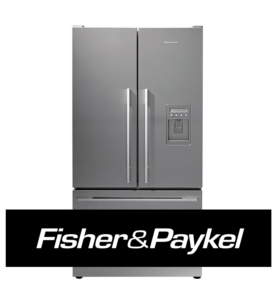 Got a problem with your Fisher and Paykel fridge?

We are experts in repairing this brand of fridges and freezers.

Same-day service with no call out fee throughout the Melbourne Eastern and South Eastern suburbs.

Fisher & Paykel design engineering is second to none. The designs and functionality have been
thought through carefully before manufacturing for the consumer.

These machines have been intuitively designed to perform its functions efficiently with simplicity.
When it comes to breakdowns the design lends itself to ease of diagnose, replace or repair for our experienced Fisher and Paykel service agents.

See what our customers are saying & leave your own review.

Just like all brands of refrigerators Fisher & Paykel has it’s hidden design flaws which can let it
down in some areas. Most common faults or issues with all makes of Fisher & Paykel refrigerators are the heating
elements which generally fails within 5 to 7 years. The main symptom is the refrigerator starts
tripping the main switch board safety switch or RCD.

Another symptom is when your Fisher & Paykel refrigerator stops cooling properly but the freezer seems to be
ok and the LED display inside the refrigerator is flashing green and red and also continuous beeping
immediately when the refrigerator door is opened.

Second most common issue or failure that Fisher and Paykel repair agents routinely have to deal with is the two fans - one in the refrigerator and the other in the freezer. The more common one to fail is the one in the freezer due to the temperature which over time damages the wiring on the fan causing it to fail. The symptoms are continuous beeping immediately after opening the fridge door and also display flashing
continuously.

The French door models are very similar but have other common issues other than the main defrost
heater which is an issue with all refrigerators no matter what model or brand.

The main issue for with the French door refrigerator is the door flap heater which is located on the left door
itself. Due to the continuous opening and closing of the door wears out the wiring at the hinge
causing the door display to give a f20 error and immediately beeping when opening the fridge door.

If the wires on the left top hinge are intact and not broken then a multi meter should be used to see
if the door flap heater is measuring some resistants in ohms usually around 15ohms. If only a open
circuit is measured then the door flap heater is faulty and needs to be replaced.
If the door heater is measuring 15ohms and the wiring has been checked and measures OK, then
most likely the main board is faulty and needs to be replaced for correct operation.
The French door Fisher & Paykel models usually come with water and ice dispenser which can add
additional issues.

The f20 error code is related to the ice maker sensor which is located under the ice-maker inside the
freezer compartment. Usually the sensor wires have broken off due to the continuous twisting of the
ice tray when dumping of the ice cubes. Usually the sensor wiring can be soldered back together if
the wires are not severed too close to the sensor itself.
Fisher & Paykel have been in the market of refrigeration for around 30 years and has established
itself as one of the main players in the appliance domain. This is very beneficial for the consumer
because all parts and accessories are readily available so no situation should arise such as having to
have to purchase a new refrigerator due not being able to source parts needed for repairs.

Call us now for a qualified, licensed fridge mechanic. We service all of south and east Melbourne suburbs. Same day service, no call out fees - ask for Paul!
CALL NOW

NO CALL OUT FEE!